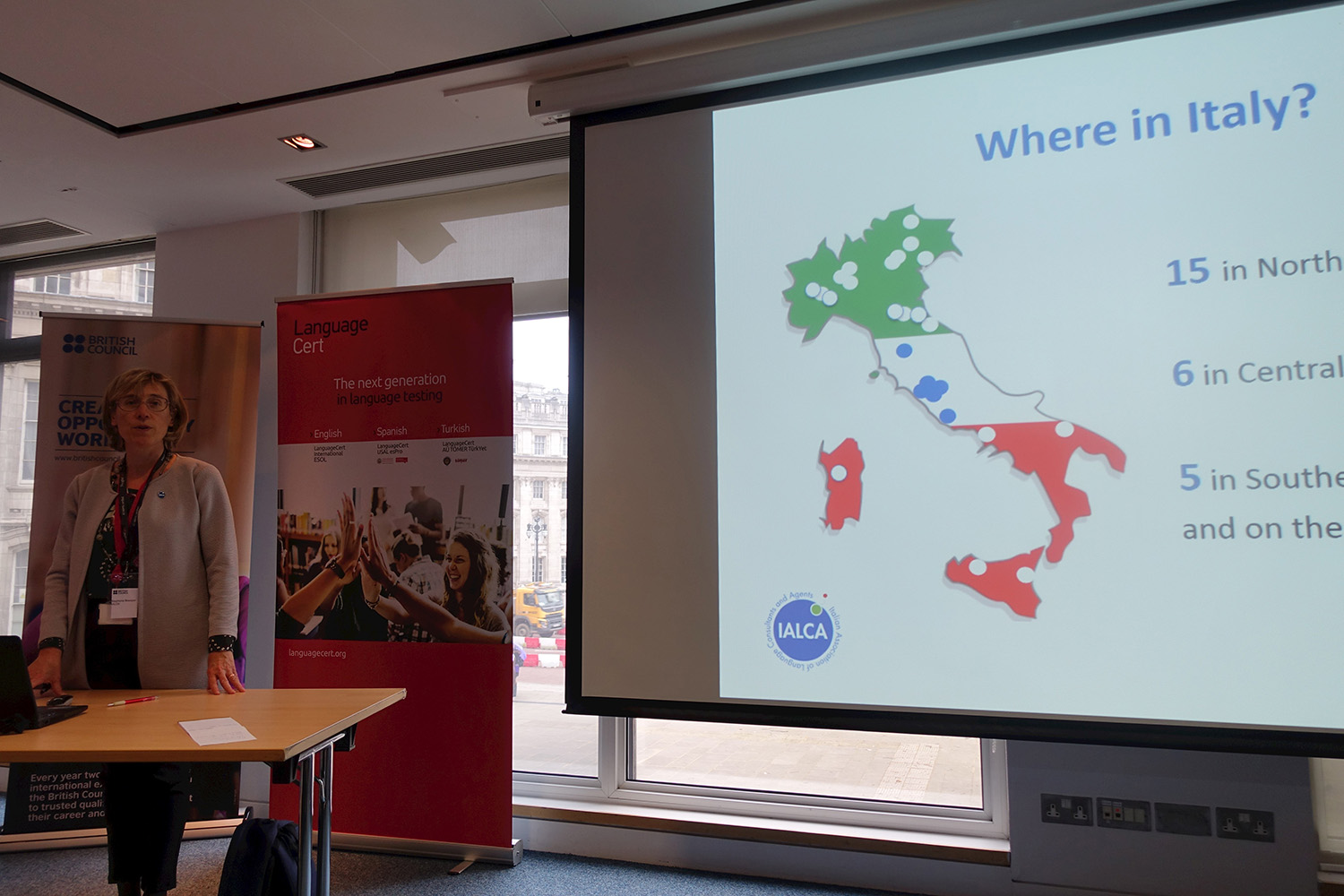 10Mar201926Aug2019 By Felca InNews
Add Comment
The outbound markets and language study scholarship schemes of Italy and Spain were the focus of presentations by their respective national agency associations at a special event held by LanguageCert in the UK last week.

Held at the British Council  office in London, Language Cert welcomed representatives from UK language schools to hear presentations by IALCA and ASEPROCE, as well as English UK on data trends.

Stefania Bresquar , Director of GEO International agency and a board member of Italian agency association IALCA , outlined the scope and structures of some of Italy’s national, regional and EU-funded scholarship schemes that provide money for studying abroad.

The EU-backed PON scheme for 2019 is operating with the theme of ‘global citizenship’, and Stefania advised that some headmasters are planning to use the funding for projects within Italy under that topic. She highlighted that IALCA has lobbied successfully for host family accommodation to be included within tenders this year, as previous stipulations for residential have eaten up a large share of the available funding.

It was discussed that the future viability of PON groups to the UK was under question after the UK’s departure from the EU. PON funding is currently eligible for destinations that are members of the ERASMUS scheme, so as long as the UK continues participation in Erasmus PON to the UK should continue, Henry Tolley , Head of Business Development at LanguageCert, advised.

Meanwhile, the Italian INPSIEME scheme for children of state employees up to the age of 16 will provide 22,930 places this year, up to €2,000 per student. After receiving notification of the award, families will apply to agencies to organise a placement. Half of the scholarship money is paid in advance, with the remainder after completion of the course and post-course documentation. “We need to work with schools on this,” said Stefania.

The ITACA scheme provides 1,500 academic year scholarships for 16-to-17-year-old students, with the terms of payment even stricter; and the Corsi di lingua all’estero scheme provides up to €3,800 for 1,170 students aged 16 and above to take a three-to-five-week language course overseas, with the full grant paid to the family upfront.

Stefania also outlined that the 2015/2032 EU Parliament Directive was adopted into Italian law in July 2018, meaning that legally only licensed travel agencies can organise group travel because of liability insurance. She said it was therefore illegal for Italian secondary schools to work directly with language schools overseas without the involvement of an agency.

In a section on what agents are looking for, Stefania urged English UK and the British Council to create one single information document for minors, arguing this would save considerable time for schools and agencies. Representing the Spanish agency association Aseproce, Rafael Rivas of Interway, highlighted a number of shifting trends in the Spanish outbound market, including the improving level of English and the fact that it is harder to retain customers. He added that mini stays are “cannibalising” the summer market and provide small margins for agents and schools, and advised that some agencies have “given up on adult students”. With regards to scholarships in the Spanish market, Rafael advised that these operate on a regional government level, with most of the available money directed towards Spanish teachers of English. The process generally involves the government setting out conditions, a tender process – during which agents will request prices from schools to build a quote – and then selection of the successful bidder.

Commenting more broadly on Brexit impacts, Stefania said if passports are required some Italian groups will inevitably choose Ireland or Malta instead, because Italian passports are expensive and can take up to six months to obtain. Rafael commented that the UK will always be the number one destination for Spain, but at this moment it is difficult for parents to choose the UK with all the noise around Brexit in the media.

Highlighting that LanguageCert now offers 20 per cent commission on exams booked by agents, Henry said that if every PON overseas student (approximately 30,000) took a LanguageCert exam as the required external exam component of their PON course, Italian agents would receive a total of €450,000 per year.

He added that the LanguageCert test can be booked at seven business days’ notice and that results are issued electronically within 10 business days of the test being taken.

In a presentation on market trends, Tim Barker, StudyWorld Commercial Director, highlighted that in English UK’s full-year 2017 data, Italy recorded a 29.3 per cent increase in students, while Spain registered growth of 11.2 per cent.

Referencing more recent data from English UK’s Quarterly Intelligence Cohort (QUIC) scheme for the third quarter of 2018 – the summer peak season – he showed that Italy commanded 16.4 per cent of all student weeks, while Spain accounted for 7.2 per cent.

For the Spanish market in 2018 Q3, 39 per cent of student weeks were juniors, 42 per cent were from group bookings, and 73 per cent of weeks were booked via an agency.